go here, from now on. As the book’s publication year approaches, I need to give more energy here to its concerns. But I did want to let you all know how the move came out!

I’ve mentioned, methinks, that I’ve  had a longstanding not-so-secret crush on the City of Brotherly Love (and sisterly affection) for more than ten years, a side grace note to my torrid love affair with the city of my birth. New Yorkers (and I’ll likely call myself one till I die) like to feel with Colson Whitehead that “I was born here, and thus ruined for anywhere else…..” The first Pelham in the subject line is Pelham Bay, the Bronx neighborhood from which I [was] sprung.

But I’ve always had  a soft spot for small cities, and when I first got to know Philly I was living in San Francisco, which is even smaller, and came here because my organization had an office here. Philly struck me as a cross between Baltimore, where I once moved to heal from divorce, and that other colonial town where the Lenape first met Europeans.

Of course, as you know I actually moved nearly a year ago from Manhattan, to which I moved in 2000 an exultant new lover. The circumstances even made the papers. But it wasn’t until a couple of months ago that we felt able to look for an apartment here — and less than a month ago, had the incredible luck to find a place in Mount Airy, not the first Philly nabe I fell in love with (that honor goes to Old City) but a place that already feels almost as much home as did Washington Heights/Inwood, where we lived for six years, or my long-cherished Mission District. (Those two years in Greenwich Village were dreamy, but always felt borrowed.) I do feel a little like a stereotype, being so happy about the food co-op, the lesbian-owned bookstore, but there we are.

Mount Airy, where we live now, is none of those places: it’s completely itself. Its history is slightly younger than NYC’s, though settled first by Germans in the 1680s (and first called by the English “Beggarstown,” which feels kind of appropriate for us if not the actual neighborhood). 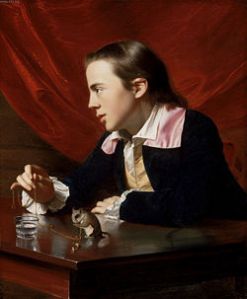 The major street nearest to me also bears the name of Pelham, an estate owned by the Revolution’s hardest-working engraver (or someone else in his family). We don’t live in one of the nabe’s stained-glass beauties, but a Victorian that has its own deep charm

I’m writing this now as a transitional post between this and New in Philadelphia. There, I might feel more free to include quieter observations, like how it feels to be reunited with a cat or why I’m beginning to suspect that I’m actually in Berkeley.